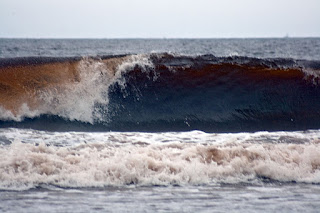 The surf this morning at Bolinas didn't look inviting so I kissed it off and went for jog on the beach at Stinson. All along the beach from the park to Seadrift, the water was a murky red-brown. The red tide was in and it was thick. We have seen the red tide for a couple of weeks now. After my run, I went back to the car and got my camera and took a few pictures. The red tide was especially prevalent near the main parking lot of the park. At home I jumped on Google to learn more about this phenomenon. Here's what I found.

Wikipedia - definition: common term for a phenomenon known as an algae bloom. The algae phytoplankton are single-cell plant-like organisms can form dense visible patches near the water's surface. The dinoflagellates or diatoms species of phytoplankton contain pigments that vary in color from green to brown to red. When the algae are present in high concentrations, the water appears discolored, often a reddish-brown color. Harmful algae blooms are those that produce natural toxins (Karenia brevis most common marine algae of this type) or deplete dissolved oxygen in the water, both of which can kill marine organisms, coastal fish, birds and mammals.

Occurrences of red tides are usually seasonal resulting from coastal upwelling or natural movement of ocean currents. The growth of marine phytoplankton requires relatively warm water and the availability of nitrates and phosphates, which can be abundant in agricultural run-off as well as in coastal upwelling zones.

Thread Starter 9/2/11 (a publication for the serious sports fisherman): A large number red abalone and sea stars deaths have been reported, the California Department of Fish and Game said yesterday. The department has confirmed reports of dead sea creatures in Bodega Bay, Russian Gulch, Fort Ross, Timber Cove and Salt Point State Park since Saturday (8/27/11). The deaths coincide with a local red tide bloom and calm ocean conditions, which may be the reason for the invertebrate die-off. An exact number of deaths has not been reported, however abalone fishermen are advised to contact a doctor if they feel sick.

The Press Democrat 9/15/11, "State Cancels Sonoma Coast Abalone Season" by Sam Scott: The California Fish and Game Commission has ended the abalone season in Sonoma County, more than two months before its scheduled conclusion. The emergency decision follows the death of an untold number of shellfish, which began washing up on local beaches on Aug 27. Scientists suspect the die-off of abalone, chitons, sea stars and other invertebrates resulted from an explosion of plankton that bloomed around the time the deaths began. It remains unclear if the red tide suffocated or poisoned the animals. But the results have been stark. This week state divers reported that 30 percent of the abalone found in samples taken in Fort Ross area were dead, as were 25 percent of the abalone at Timber Cove and 12 percent at Salt Point.

"There were more abalone dead on the rocks than I have ever seen on the water," said Bill Mashek, a local diver of 30 years. "The population has been devastated. Further hunting is only going to devastate it more."

The emergency closure is limited to Sonoma County. Waters off Mendocino, Marin, Humboldt, and Del Norte counties remain open through Nov 30, the normal end of the season.

Central and Northern California Ocean Observing System (CeNCOOS) website: Breaking News! Major bloom of toxin producing dinoflagellate, Gonyaulax spinifera, documented in Bodega Bay and surrounding coastal areas between Pt Arena and Pt Reyes in late August through early September. The bloom is possibly continuing in some areas of the north coast as of 9/22/2011. This type of bloom is very uncommon and the impacts of the toxin (called yessotoxin) on marine life and people using the ocean are uncertain. Partially coinciding with the bloom was a huge die-off of marine life from approximately 8/20 - 9/4. Apparently limited to invertebrates, dead abalone, crabs, urchins, chitons and seastars washed ashore on north coast beaches in large numbers. It is still unclear whether the algal bloom is linked to the die-off. Other potential causes for the die-off include viruses or bacteria.

CeNCOOS is one of eleven regional associations within the Integrated Ocean Observing System (IOOS) around the nation dedicated to the support of science in the service of marine ecosystem health and resource sustainability.

Marin IJ 11/27/11 "Spread of Toxic Algae Blooms a Growing Concern" by Peter Fimrite. (Thanks to Marty for broadcasting this article to the Bolinas regulars). Marine scientists are trying to find out why previously unknown blooms of toxic algae are suddenly proliferating along the California coast, killing wildlife and increasing the risk of human sickness. The mysterious blooms have recently been bigger and have occurred more frequently than ever before; an alarming trend that a team of scientists led by UC Santa Cruz is attempting to figure out.

"It is a huge problem for wildlife," said Raphael Kudela, a professor of ocean sciences at UC Santa Cruz and the lead scientist for the study, which began last week. "We've seen a lot more of what we consider unusual events. It's not always the same organism, but new things keep cropping up. The million-dollar question is: What exactly is the change in the environment that these things are linked to?"

The danger was disturbingly apparent starting in August when a deadly red tide killed tens of thousands of abalone, sea urchins and other mollusks along the coast in Sonoma and Mendocino counties.

Scientists will deploy an array of sophisticated ocean-monitoring technology, including robotic gliders, a network of underwater sensors and satellite observations, during the five-year, $4.3 million study. The project shoved off using an $800,000 grant from the National Oceanic and Atmospheric Administration (NOAA).

Scientists will also try to determine whether climate change is having an effect on the size, frequency and location of deadly algae blooms. "We can't say for sure that it is tied to something like climate change," Kudela said, "but it does seem to be spreading globally, so something is changing, and we are trying to find out what that is."

Algal blooms are already known to be relatively common in the coastal waters of Oregon, Washington state and Canada. Recently, though, unusual toxic algal blooms have also been detected in the Gulf of Mexico, off the coast of Alabama, South Carolina, Florida, in Chesapeake Bay and the Gulf of Maine, according to researchers. Future outbreaks may be unstoppable, Kudela and others admit, but they hope the study will eventually help them develop a computer model that will predict blooms before they have a chance to cause havoc in the marine environment.
Posted by Lorenzo at 1:11 PM

Lorenzo
I retired on Feb 28, 2007 from 36 years in software development and on March 1st I returned to the sport I loved as a kid, surfing. Lorenzo's Surf Journal chronicles my surfing adventures as a retiree dealing with cold water, wind, and waves of Northern California.